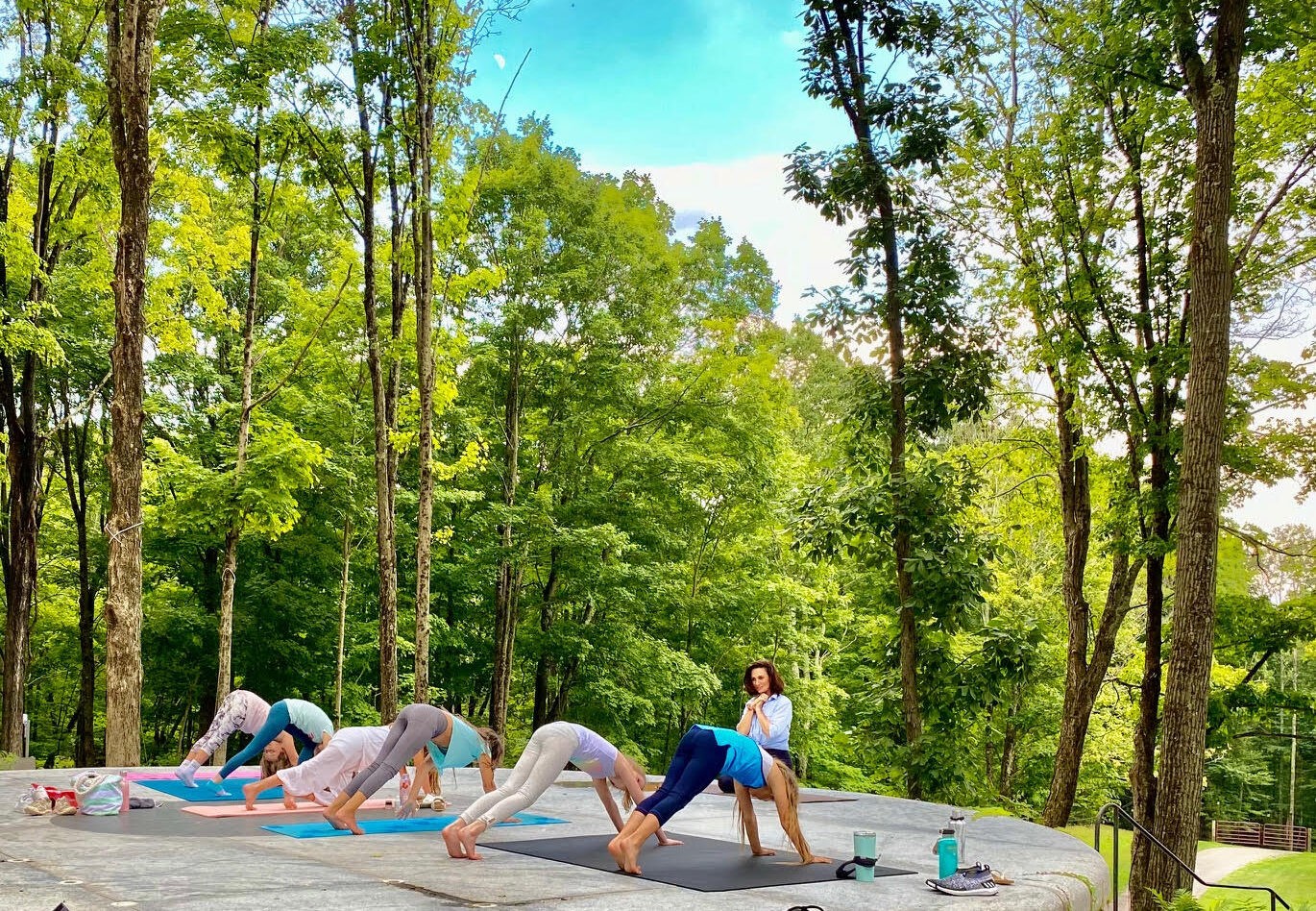 Washington is filled with arts and culture, rooted in a strong sense of community, and the work of Caroline Kinsolving is no exception. Caroline is an actress and yoga instructor, whose many experiences have brought her home to Washington. Hear more about her incredible work with Yoga for Good and Theatre for Good here in Washington and what’s coming up this summer!

Tell us about your journey from and back to Washington.

I grew up in Bridgewater and attended Washington Montessori School, so Litchfield County is home. Twenty-two years ago, I was first introduced to yoga when my father had heard about a class led by Marie Fourcaut in the Washington Club Hall, the first yoga class ever in Washington, and I went not knowing anything about yoga. I was a track and cross-country runner at Milton Academy at that time, so yoga was excruciating! But I remember thinking, “Argh, this is good for me, I can feel that this is good for me,” and kept at it. 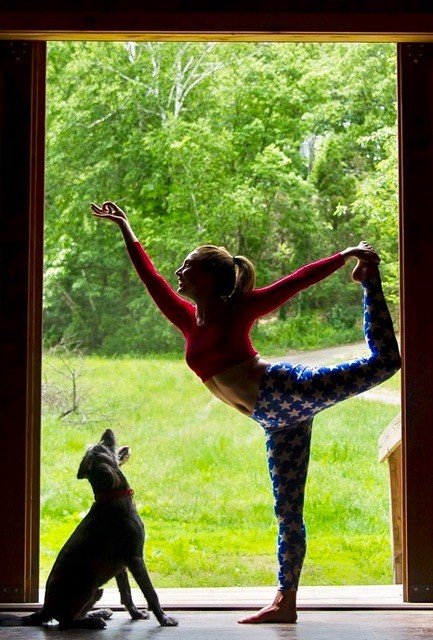 After graduating from Vassar, I went off to study theatre at Stella Adler, Yale Drama, and the Royal Academy of Dramatic Art in London, and eventually I moved to Los Angeles for 14 years for my acting career. Throughout that time, I continued doing yoga and out of sheer interest, I was certified to teach several times over. I loved sharing all the benefits of yoga with my friends and then started getting asked to teach it in schools, at studios, and privately. I never dreamed that I would be a full time yoga teacher, but, here we are.

When I moved back to the area, I hadn’t realized how much I had been missing that sense of a small town community. My heart flutters when I drive around town and I see people I know and they wave. I love that.

“My heart flutters when I drive around town and I see people I know and they wave. I love that.”

What is “Yoga for Good”?

Yoga for Good started when I moved back home and was asked to teach at a local farm. I had been thinking a lot about Karma Yoga, how to “be the change you wish to see in the world,” and how to teach yoga from a place of global mindfulness. I decided that I wanted to make yoga at the farm donation based so that anyone, from any financial standing, could take it. I wanted to make sure that classes were available to everyone who wanted to practice yoga – new parents, teachers, artists, young people, those hit by the pandemic, anyone who might not have the means to pay for classes at a yoga studio every week. And I also wanted to donate all the money at the end of each class to various charities and organizations that were working to make the world better.

It was about being a good neighbor, something I hope for as this little town develops and grows. Through the highs and lows of being an actor, I’ve learned that doing things selflessly is one of the best ways to get out of your head, beat the blues, and feel connected. We all go through difficult times, but shifting the focus from our own problems to become part of a greater good is very powerful and I wanted to share that.

I’m a big believer that when you live in a beautiful place like Washington, surrounded by great thinkers and creatives, gorgeous food at our fingertips, art and nature, you have two responsibilities: to enjoy it and to give back. To not only be a consumer, but a positive, participating citizen.

“We all go through difficult times, but shifting the focus from our own problems to become part of a greater good is very powerful and I wanted to share that.”

What organizations do the donations support?

As of today, we have been able to donate over $32,000 of all the proceeds from Yoga for Good classes to over 30 different non-profit organizations and charities. These include: The Washington Art Association, Washington Ambulance Association, Washington Environmental Council, Steep Rock Land Trust, Institute for American Indian Studies, Judy Black Memorial Park & Gardens, Gunn Memorial Library, Conversations on the Green, The Susan B. Anthony Recovery Center, The Connecticut Center for Nonviolence, The New Milford Animal Shelter, GoFundMe’s local families going through tragic times, food banks, and more.

We will continue Yoga for Good this summer on Wednesday and Thursday evenings, and Sunday mornings, at March Farm, South Farms, and The Silo, respectively. I’m so grateful to these gorgeous farms for opening their barn doors and field gates in support of Yoga for Good. Classes are open to individuals of all skill levels, curious beginners and experienced advanced are all welcome. Learn more about this summer’s upcoming Yoga for Good classes.

And how did “Theatre for Good” get started?

Theatre for Good was born from the intent of bringing my passion for theatre to this community. What started off as a reserved group of strangers from various towns in an empty room during that first rehearsal ended up turning into a beautiful performance by people that came together and shone in the stories that they told. Since its beginning, TFG has raised money with performances of Chekhov’s “The Cherry Orchard,” Shakespeare’s “Much Ado About Nothing,” and “A Midsummer Night’s Dream,” Noel Coward’s “Private Lives,” Thornton Wilder’s “Our Town,” Dianne Nora’s “Monica,” Molly Smith Metzler’s “Cry It Out,” and “Shakespeare’s Women” with television star, Anjali Bhimani. I’m very excited to bring it back this summer in person with a very special guest for a summer performance of “Almost, Maine” and just like Yoga for Good, all the proceeds will be donated.

What is this summer’s performance of Almost, Maine about?

Almost, Maine is a play about love, in all its fine, funny, and complicated forms, in a small, New England town. It’s written by Tony Award nominee John Cariani. I first heard about this play when I was in New York City, fresh out of drama school, and someone handed me a flyer for this new off-Broadway play. Soon after, I went to Los Angeles and was perusing the Samuel French Bookshop where I saw a casting call for the West Coast debut of Almost, Maine. I called my agent, got an audition, and they hired me. John is the reason I got my Equity card all those years ago and we’ve been friends ever since.

Fast forward to today, Almost, Maine has become the most produced play in the country, has recently been turned into a novel, and the big news is that it will soon be a Broadway musical. The other big news is: John will be starring in The Roundabout’s production of Tony Kushner’s Caroline, Or Change this autumn on Broadway.

This July in the Depot, John and I will be performing Almost, Maine and John will also be doing a Q&A and book signing at the Hickory Stick Bookshop on the same weekend. I’m really excited for people to see the play, meet John, and buy the book. It’s going to be a very special weekend and the money raised from the performances will go to the arts, as well as to Judy Black Park and Garden, in honor of Denise Trevenen, who was one of this community’s greatest neighbors. Learn more about this summer’s Theatre for Good performance.

The Po, The GW Tavern, The Pantry, (and I’m fairly obsessed with Farmers and Cooks’ sourdough bread!)

The views at Averill Farm and Solley’s Fields.

Favorite thing to do:

Visiting the gallery at the Washington Art Association and perusing the shelves of the Hickory Stick Bookshop. I also really like talking to the folks at Washington Supply Company – they know everything.

Must do in Washington:

Walk through the fields and the forests, lay in a field with the fireflies at night, rock in a hammock and look up at the stars with someone you love.