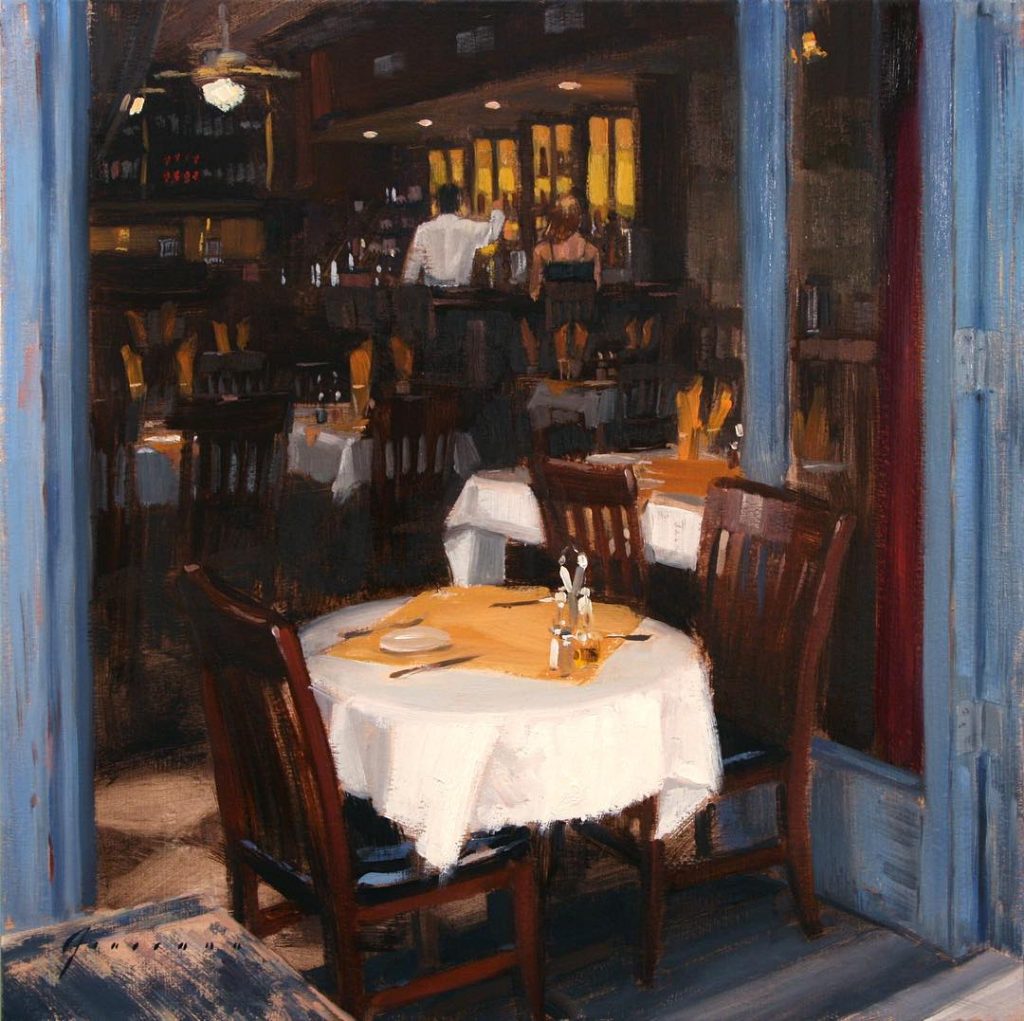 Although internationally known for his larger paintings of New York City life, Vincent Giarrano also paints small--very small--as part of his process for developing an idea. These miniature masterpieces will

Although internationally known for his larger paintings of New York City life, Vincent Giarrano also paints small–very small–as part of his process for developing an idea. These miniature masterpieces will be featured in a special holiday exhibit of his work at the Gunn Memorial Library Stairwell Gallery in Washington from November 4 through December 9. There will be an opening reception on Saturday, November 4 from 2 PM to 4 PM. Giarrano, a Washington resident, will be in attendance to answer questions.

Vincent Giarrano captures what others might consider mundane everyday events but treats them with such honesty and sincerity that they are transformed into timeless moments. Working in the realist tradition, he explores the beauty of contemporary urban life. Whether on the streets of New York City or in their apartments, his subjects are depicted in rare quiet moments of introspection. With a style reminiscent of Edward Hopper and John Singer Sargent, he captures his subjects’ thoughts, feelings and personalities.

The artist began his training at The State University of New York at Buffalo, where he pursued a Bachelor of Fine Arts. He went on to earn a Master of Fine Arts from Syracuse University before moving to New York City to begin a career in illustration. In 2005, Giarrano returned to the fine arts with a renewed interest in realism, both in style and subject.

New York’s ever-changing nature and the young people trying to make the city their own provide his inspiration. “New York has a definite vibe and energy that you can’t help but feel,” says Giarrano. “I wanted to tap into that edge of reality.” He points out that most of all the common element in his work is a focus on real life and an attention to detail that glorifies the sincere moments that occur in our daily lives.

Giarrano’s work has been shown in group and solo shows across the country as well as overseas. It has also been included in museum exhibitions such as The National Portrait Gallery in Washington, DC and the BP Portrait Award at the National Portrait Gallery in London. His work has appeared on the cover of The Artist’s Magazine, Southwest Art Magazine and he is regularly featured in American Art Collector and other art publications.

The Gunn Memorial Library is located at 5 Wykeham Road at the juncture of Route 47 opposite the Green in Washington, CT.  For library hours and to learn more about Gunn’s programs and events visit gunnlibrary.org.