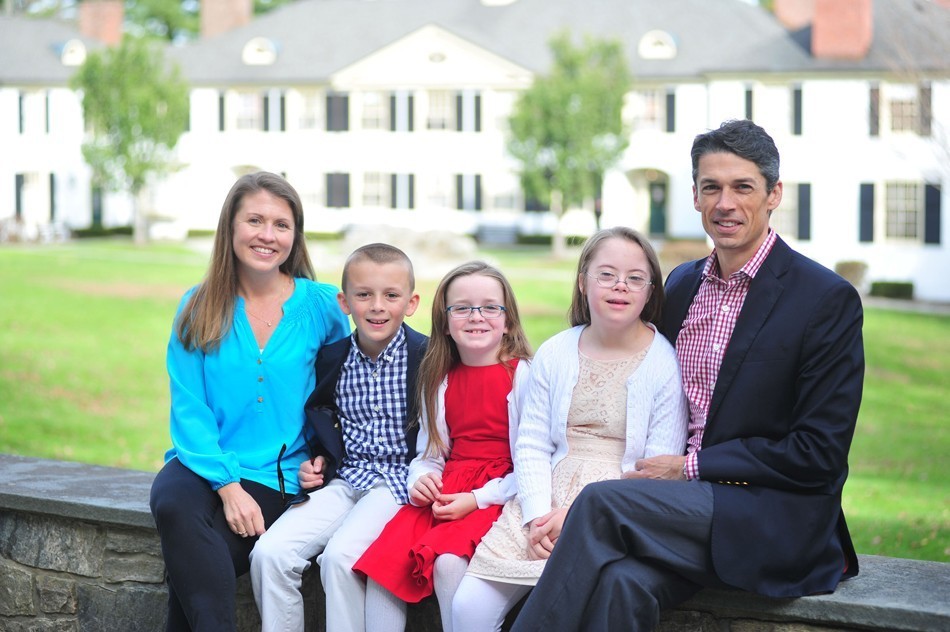 Pictured Above: Peter Becker and wife Amy Julia with their family.

We had the pleasure of spending time with Peter Becker, the 11th Head of School since The Gunnery’s founding in 1850. He shared his thoughts about the historic relationship between the town and the school, as well as his personal experiences as a new member of this great community.

Tell us about your path to The Gunnery.

I became the Head of School at The Gunnery back in 2012. Before coming here, I spent 9 years at the Lawrenceville School in Lawrenceville, New Jersey as Master of History and Interdisciplinary Studies. Along with coaching and being a House Master, I primarily taught history and eventually became the director of the school’s Interdisciplinary Studies Program. Prior to Lawrenceville I had a brief career in investment banking and then worked for a non-profit called FOCUS that works with independent schools.

I got a call about the Head of School position at The Gunnery and, after an eight-month hiring process, I received an offer and it was an immediate yes on our part. So, my wife, Amy Julia, our three children, Penny, William, and Marilee, and I set off for our new adventure to Washington. We have been living in town for six years now and we couldn’t be happier.

Did  Washington as a locale play a role in your decision to become the Head of School at The Gunnery?

Absolutely! It was one of the reasons why I took the job. When I originally got the call considering me for the position, I did not know Washington very well. One of the big questions that my wife and I had was if this town was a place our kids could call home. At the time, our kids were 6, 4, and 1 year old and we wanted to make sure that the town was the right place to raise our young family. We took a clandestine trip, drove through campus and around Washington Depot and fell for the town. We had lunch at Marty’s Café, visited the Steep Rock Preserve and were just amazed by the scenery. From our short trip, we realized that this was a pretty incredible place to raise a family.

Also, I was captivated by the history of The Gunnery. During the search process, I read anything that I could get my hands on about The Gunnery and Frederick Gunn. I related to Mr. Gunn and his philosophy about education as well as about life in general. His views and the school’s educational practices really fell in line with my beliefs. Everything about the school and Washington just seemed to fit together, both for my family and me.

What’s it like being a part of two communities, The Gunnery and Washington?

It’s fantastic. In fact, both communities are very welcoming, friendly, and tight-knit. Everyone knows everyone else and all truly care about each other. My kids love all things Gunnery and all things Washington too. Their experience with the town and especially in the local schools has been extraordinary. Now we have two kids at Washington Montessori and our 6th grader is at Shepaug Middle School. They couldn’t be happier. We are quite impressed by the quality of schools, both private and public, in Washington.

Tell us about the relationship between The Gunnery and Washington?

I would say that it is a mutually supportive relationship. You can make the argument that The Gunnery and Washington essentially grew up together. The development of the school played a big part in the development of the town and vice versa. The two communities really influence one another, which was what Mr. Gunn wanted. He felt that students and faculty should be both citizens and leaders of the school and of the town.

Today, The Gunnery has many great relationships with the people and places in town. For instance, the school shares its tennis courts with the Washington Club in summer and our golf team uses the Club’s golf course in spring. Then, there is the Family Skate at our ice rink every Sunday afternoon during the winter. This has been a tradition since the 1970s and it is very popular, enjoyed by people from around town, thanks, from what I understand, to generous support from Jim Goodale, the Gorra family, and others here in town. (I’m sure I’m leaving people out–but I wasn’t even born at the time!) And I love bumping into people at The Cafe on The Green, which our students call “The PO”–the school has owned that building for many years.

Another important connection between the town and the school is the involvement of a number of Gunnery faculty and staff in local volunteer organizations including the Washington Ambulance Association and the Fire Department.

I would say that The Gunnery is rooted in and is very much a part of the creative nexus of the Washington community. The school hosts several of ASAP! programs, the Young Writers Celebration Series, Conversations on the Green, our Speaker Series, and Garden Club Centennial. We will be very involved with Pilobolus’ Five Senses Festival, an exciting event that is to take place this summer. With the development of our new Arts and Community Center, my hope is that The Gunnery can become even more a part of the cultural and creative fabric of our town.

Can you tell us a bit more about the New Arts & Community Center?

The center will be about 32,000 square feet and will house a professional grade theater with seating for the entire school community and guests. It will have classroom and studio spaces for graphic and digital arts, drawing, painting, ceramics, and photography. Also, there will be instrumental and choral rehearsal spaces as well as a gallery space, reception areas, and an outdoor sculpture garden. It will be located opposite our dining hall and student center across a newly-created green space.

This new center is the biggest capital campaign project in the school’s history and we have four alumni to graciously thank for it – Thomas Perakos, Jonathan and Steven Tisch, and Dick Colton . It will definitely help expand and diversify our arts programs in addition to the overall curriculum of our school. It will benefit not only future generations of Gunnery students, but also the town of Washington and its residents. We are very excited to be breaking ground on June 9th.

We are very excited for you as well! Do you think that the Gunnery’s Washington location influences a student’s decision to study here?

No matter what school you are considering, I think the town that surrounds it plays a big part in the decision process, especially for the parents. They want to make sure their child is in a safe environment and that their child is somewhere that he or she feels comfortable. It’s no question that they get this with Washington. Every family that has come to visit us and has spent time here has fallen in love with the town–we tell every family who comes through Admission to visit the Depot and New Preston before they leave the area. They immediately see what I saw on my first tour through the Depot, which is a warm, kind, and vibrant community that will take care of their child. In fact, many families, during and after their child’s time at The Gunnery, have become involved with community projects in Washington. And the Grace Mayflower Inn is certainly a wonderful perk for visiting parents!

What do you think makes Washington special?

First and foremost, its history and the long-standing families who have been committed to it for generations. Washington is a uniquely American blend of tradition and progressivism, natural beauty infused with great culture. It is a wonderful place to raise a family. We’ve seen a steady influx of young families living here. I think that really reflects on how warm and nurturing a community Washington is. It has an excellent school system and so many enriching things to do for the entire family. Also, I just love how this community works together. Everyone is very supportive of one another and is committed to bettering the town and making it a wonderful place to live.

Learn more about The Gunnery.
Follow Peter Becker on the Head of School blog

“Of equal moment as bearing on the outcome of the Gunnery plan was the keen sympathy and interest between the village and the school. Each seemed to live for the common good of both, and each reflected on the other the mutual good-will.”

– From The Master of the Gunnery (A Memorial of Frederick William Gunn by His Pupils, 1887)