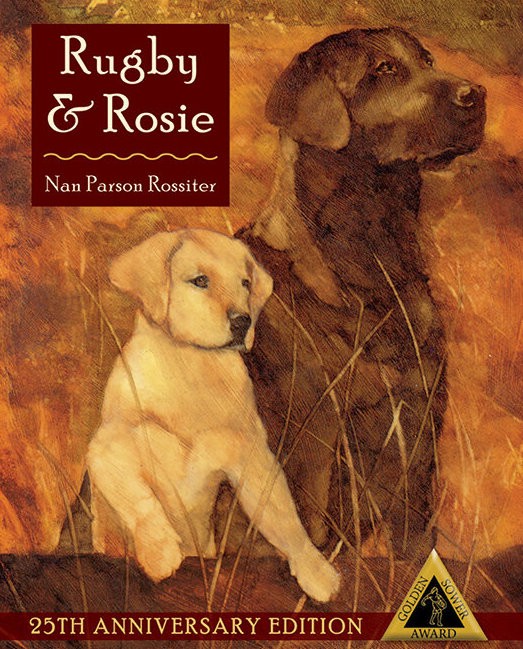 We welcome back one of our favorite local authors, Nan Rossiter, as she celebrates the 25th anniversary of “Rugby & Rosie” - the winsome story of two dogs and a

We welcome back one of our favorite local authors, Nan Rossiter, as she celebrates the 25th anniversary of “Rugby & Rosie” – the winsome story of two dogs and a young lad and a way of giving that makes a difference.When it was originally published Kirkus gave it the following review:

“Rossiter’s first book is a moving and informative account of a family and the puppy they raise for a year, until she is old enough to train to become a guide dog. Rosie is a yellow Labrador retriever puppy, and Rugby is the family’s chocolate Lab. The story is told by a boy who is best friends with both of them. Boys and dogs spend hours playing together, but Rosie gets special training, too. Her family is strict with her about begging at the table or jumping up on people; they help her grow accustomed to traffic and commotion by taking her downtown to stores, on city buses, and other places her new owner will need her. Particularly well-limned are the boy’s mixed feelings as Rosie’s departure draws near. He wants her to succeed as a guide dog, but if she fails he’ll be able to keep her. When Rosie does leave, it’s Rugby, of course, who suffers the most, without an understanding of where his friend has gone. The golden, sun-drenched paintings convey the warmth and love evident in the story and capture all the action of the two lovable dogs at the story’s center. An afterword provides facts on guide dogs and an address to write for more information. A resonant debut.”

We will also be featuring Nan’s other books including Fo’c’sle a story about naturalist Henry Beston who in 1926 lived on Cape Cod in a little house named the Fo’c’sle, observing  native and migratory birds and other wonders of nature as the seasons change. Excerpts from Beston’s nature book “The Outermost House” are interspersed throughout the story along with Rossiter’s captivating illustrations.. More recently Nan has published two novels in the Savannah Skies series, Promises of the Heart and Promises to Keep with the conclusion coming Spring 2022.

Nan Parson Rossiter is a graduate of the Rhode Island School of Design and began her writing career in the world of children’s books.. Along with her children’s books, Nan is also a New York Times and USA Today bestselling author who loves to weave together stories about the complicated relationships to which all readers can relate — motherhood, sisterhood, friendship, marriage, and romance  including threads of faith, a furry friend or two, and an uplifting ending. Nan’s books have been highly acclaimed by reviewers from Publisher’s Weekly to Booklist. Nan lives on a quiet country road in western Connecticut with her husband and a solemn black Lab named Finn, who diligently watches her every move and can be roused from a slumber in a distant room by the sound of a banana being peeled or a cookie crumb hitting the floor.

This event is free and open to the public.  If you are unable to attend this event, you may reserve a signed copies of Nan Rossiter’s books by calling The Hickory Stick Bookshop at (860) 868 0525. For further information about this event please visit www.hickorystickbookshop.com or email [email protected]