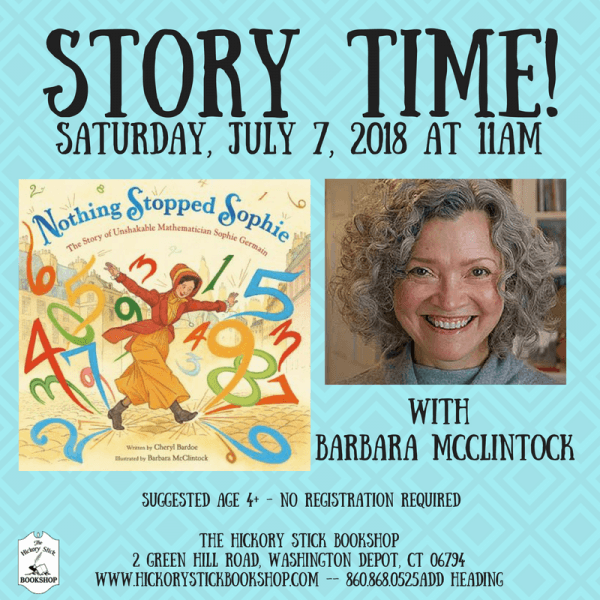 The Hickory Stick Bookshop will host a children’s story time with critically acclaimed children’s book illustrator Barbara McClintock, who will read and sign copies of her new book Nothing Stopped

The Hickory Stick Bookshop will host a children’s story time with critically acclaimed children’s book illustrator Barbara McClintock, who will read and sign copies of her new book Nothing Stopped Sophie: The Story of Unshakeable Mathematician Sophie Germain (Little Brown, $17.99) on Saturday, July 7th at 11am. The suggested age is 4 and older, but all ages are welcome and no registration is required.
The true story of eighteenth-century mathematician Sophie Germain, who solved the unsolvable to achieve her dream.

For six years Sophie Germain used her love of math and her undeniable determination to test equations that would predict patterns of vibrations. She eventually became the first woman to win a grand prize from France’s prestigious Academy of Sciences for her formula, which laid the groundwork for much of modern architecture (and can be seen in the book’s illustrations).

Award-winning author Cheryl Bardoe’s inspiring and poetic text is brought to life by acclaimed artist Barbara McClintock’s intricate pen-and-ink, watercolor, and collage illustrations in this true story about a woman who let nothing stop her.

“With watercolor and collage illustrations, Barbara McClintock captures not only the time period but also the complexity of the math problems that occupied Sophie’s mind. […]A highly recommended addition to the growing number of books about women who have made significant contributions to knowledge yet have received little or no recognition.”
— School Library Connection, starred review

“This portrait of a quiet heroine is elegant, striking, and sure to inspire.”
— Kirkus Reviews

Barbara McClintock has illustrated over forty books for children including My Grandfather’s Coat, The Gingerbread Man, and her own highly acclaimed Adèle and Simon series. Her books have been honored five times as New York Times Best Illustrated Children’s Books, among many other awards, citations, and starred reviews. She lives in Connecticut with her husband, the artist David Johnson.

This event is free and open to the public. If you are unable to attend this event, you may reserve a signed copy of Nothing Stopped Sophie by calling The Hickory Stick Bookshop at (860) 868 0525. For further information about this event please visit www.hickorystickbookshop.com or email [email protected]