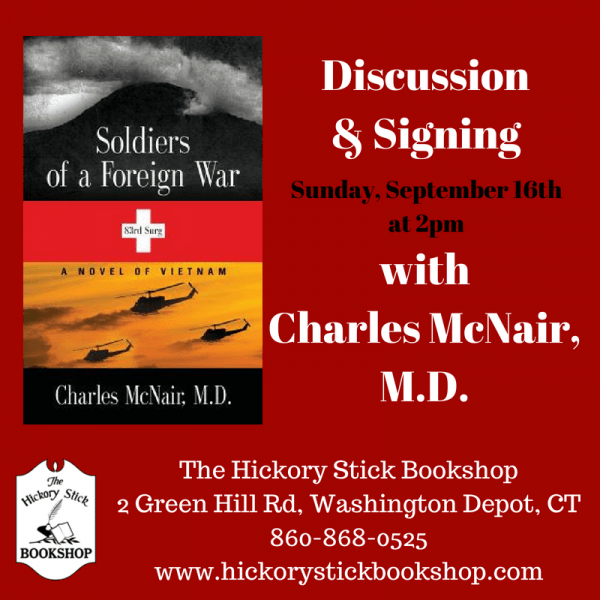 PLEASE NOTE NEW DATE: The Hickory Stick Bookshop will host a discussion and signing with author Charles McNair, M.D. in honor of his novel Soldiers of a Foreign War: A Novel

The Hickory Stick Bookshop will host a discussion and signing with author Charles McNair, M.D. in honor of his novel Soldiers of a Foreign War: A Novel of Vietnam on Sunday, October 7th at 2pm.

Novels of Vietnam rarely deal in depth with the combatants, their enemies, or how their wounds are treated. Soldiers of a Foreign War follows the lives of the men of two American infantry platoons, a three-man North Vietnamese Army combat cell, and the staff of a small surgical hospital. Along the way, McNair explores the characters’ backgrounds and cultures, training, motivations, and the challenges faced by each in detail. Drawing from his own experiences, he gives the full picture of what serving in Vietnam was like for those caught up in it. The wounds, their treatment, surgeries performed, and outcomes are dealt with to an extent which is unique in the Vietnam war genre.

Charles McNair, M.D. enlisted in September, 1968, after one year of college. He served as an operating room technician from June, 1969 to June, 1970 in the 45th Surgical Hospital, Tay Ninh province, South Vietnam. Their mission was to receive the wounded directly from the battlefield and do stabilizing surgery. The area was the site of nearly continuous combat during that time and was the jumping off point for the Cambodian invasion in May, 1970.

After McNair was discharged in 1971, he returned to college and went on to medical school. He was a practicing internist for over 35 years while helping to raise his three children with his wife of 44 years.
This event is free and open to the public.

If you are unable to attend this event, you may reserve a signed copy of Soldiers of a Foreign War by calling The Hickory Stick Bookshop at (860) 868 0525. For further information about this event please visit www.hickorystickbookshop.com or email [email protected]