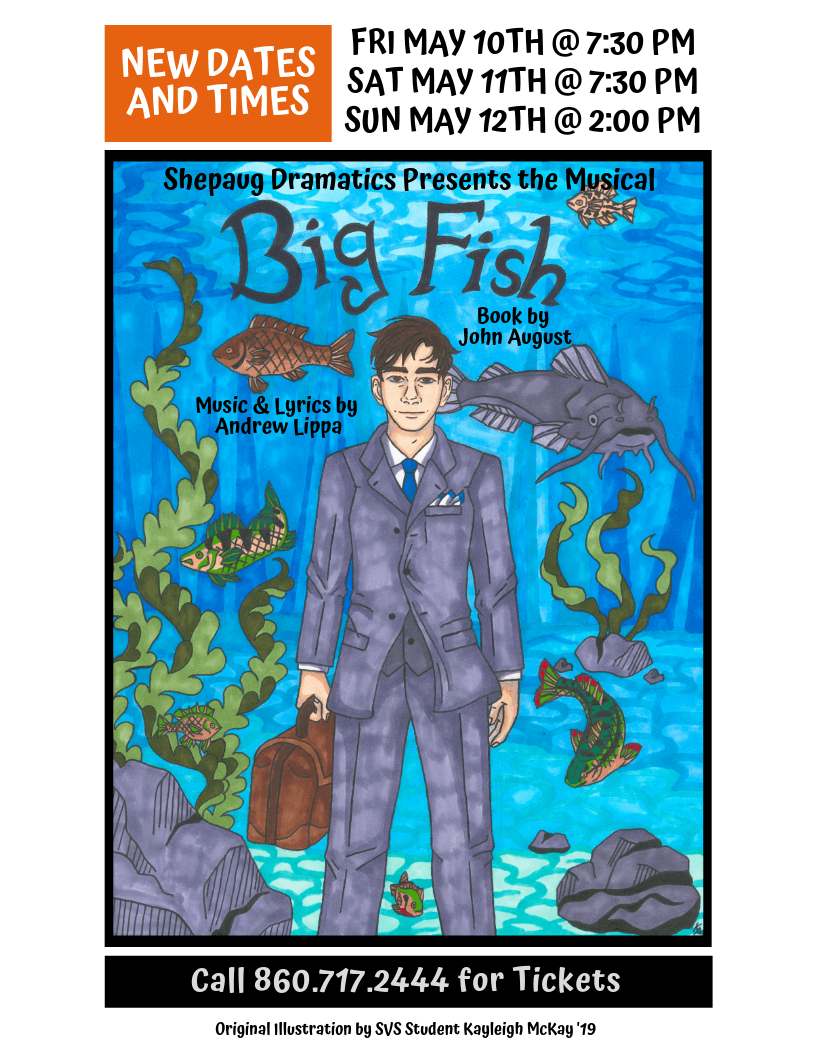 Shepaug Dramatics is proud to bring Big Fish to the stage at Shepaug Valley School on Friday, April 5th through Sunday, April 7th. Big Fish is based on Daniel Wallace's

Shepaug Dramatics is proud to bring Big Fish to the stage at Shepaug Valley School on Friday, April 5th through Sunday, April 7th. Big Fish is based on Daniel Wallace’s 1998 novel Big Fish: A Novel of Mythic Proportions. The musical has been compared to The Wizard of Oz, The Odyssey and Music Man. The story which features flashbacks and tall tales that come to life quickly caught the attention of American screenwriter John August who adapted the novel for the 2003 film Big Fish. In 2013, John August brought the story to Broadway with music and lyrics by Andrew Lippa. The Broadway production ran for more than 100 performances in 2013. Broadwayworld.com gave the show a regional award for Best Musical. Variety called it “(A) wholly satisfying show: meaningful, emotional, tasteful, theatrically imaginative and engaging.”

The all-student cast and crew will feature a combination of solo and ensemble performances with direction by Timothy DeRosa and choreography by Rebecca Rasmussen. “Big Fish is a moving, indelible story that recounts a father’s fantastical and quirky tall tales he tells to his son, his wife, and anyone who is willing to listen.” “Rebecca and I are thrilled to be working with this dedicated group of students who have been recognized for excellence in High School Theatre at the annual Halo awards ceremony produced by Seven Angels Theatre,” says DeRosa, an alumnus of Shepaug Valley School.