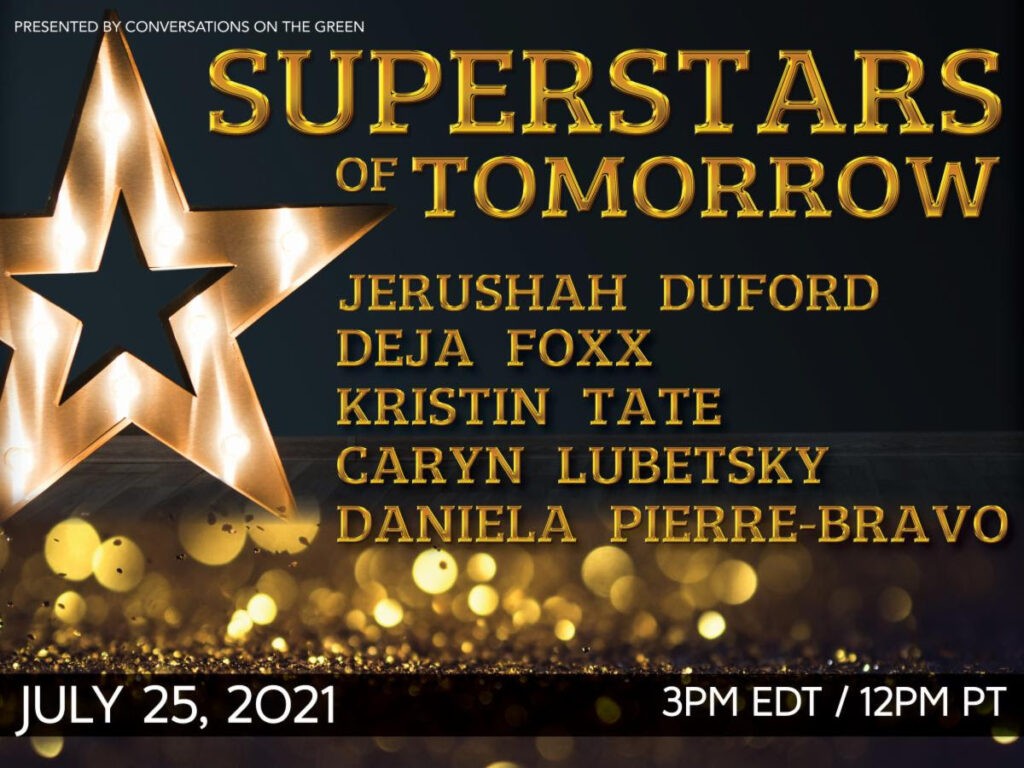 The sixth virtual town hall of the season will bring together young luminaries to discuss how to make a difference and their visions for the future. REGISTER

The sixth virtual town hall of the season will bring together young luminaries to discuss how to make a difference and their visions for the future.

When 19-year-old Mark Zuckerberg launched Facebook, he was just one year older than Alexander the Great was when he conquered his first territory and two years older than Malala Yousafzai was when she became the youngest person to ever receive the Nobel Peace Prize.

And the rest, as they say, is history.

Young people often defy expectations. Time and again they transcend the creative boundaries that limited previous generations, innovating in ways that seemed impossible until achieved. In art, business, politics and science, ideas sprung from the cauldron of young imagination often surpass even the most visionary notions about what is possible.

But carrying society’s torch is not without its burdens. While some changemakers draw inspiration from within, many are pushed into working toward the public good because of inherited tribulations; the bells of the future toll for the young, whether it’s climate change, racial injustice or authoritarianism. As an organizer in the youth climate organization, Sunrise Movement, says about coming generations, “We don’t have a choice.”

The young luminaries shaping the world – and their ideas – are the subject of the July 25 episode of Common Ground with Jane Whitney. In the series’ sixth episode of the season, “Superstars of Tomorrow,” the panelists will discuss their work, their missions, their Eureka moments, how they became involved, their visions for the future and how anyone, regardless of age, can make a difference in their communities and the country.

Homeless at the age of 15, Foxx used the adversity she faced as motivation to fight for reproductive justice and the associated healthcare that is disproportionally inaccessible to low income women.

She first gained national attention for her candor and courage while confronting former Senator Jeff Flake over his opposition to Planned Parenthood Title X funding, a viral exchange that launched her to the front of the reproductive rights movement and allowed her to share her story live on CNN and in the halls of Congress.

Foxx has demanded reform locally and nationally – from improving her hometown’s sexual education system to helping found the Reproductive Health Access Project in New York City, which provides sexual education and services to over 4,000 teenagers. At 19, Foxx took a year off from college and joined Kamala Harris’ 2020 Presidential Campaign as their youngest staffer and first ever Influencer and Surrogate Strategist.

A student at Columbia University, she is also the founder of GenZ Girl Gang, which works to reinvent and strengthen sisterhood in the age of social media by organizing campaigns that include community events, mentorship opportunities, informational digital content, and job postings. In 2018, Foxx was named DoSomething’s Empower Player of the year and a member of Teen Vogue’s 21 Under 21 in 2018. She has also received Planned Parenthood’s Catalyst for Change Award.

Daniela Pierre-Bravo, a so-called Dreamer whose personal story could have been penned by Horatio Alger, is our second panelist.

A producer and emerging on-air talent for MSNBC’s “Morning Joe” and prolific writer for NBC News and Forbes, she worked her way through college doing odd jobs and as a Mary Kay consultant and graduated in three and half years with no debt and a place at NBC’s coveted Page Program in New York City.

In addition to her writing and producing work, Pierre- Bravo, who was born in Chile but grew up in Ohio, is focused on uplifting women through economic empowerment. She is a contributing writer and millennial ambassador for Mika Brezenzinski’s “Know Your Value” movement, which helps women grow personally and professionally and the co-author of the best-seller “Earn It! Know Your Value and Grow Your Career, in your 20s and Beyond,” which strives to guide young audiences through the trials and tribulations of the beginning of their careers and professional journeys.

Lubetsky discovered her passions for both activism and running by serendipity.

As part of a plan to get back in shape after mothering three children, she ran her first half-mile a month before her 40th birthday. The self-improvement kick soon mushroomed into a passion, and since then she has completed an excruciating series of races: at least 45 marathons, four ultramarathons and three 150K ultramarathons, not to mention triathlons and several even more torturous courses.

The hobby turned into a life-defining mission at the 2013 Boston Marathon. She had just finished the race with her children watching from the roadside when two bombs went off, killing three people and injuring hundreds of others, including 17 who lost limbs. “That was the moment their innocence was stolen,” she says, “and it was a moment where I knew, no matter what, that running had to have a bigger meaning than just how fast I can run.”

Since then, she has made endurance athletics a platform for fostering community, empowering the disabled and giving voice to the voiceless. She has raised around $300,000 for childhood cancer, founded and sustained a national charity, worked to promote running as a place that is welcome to people of all physical abilities and, paired with a quadraplegic partner, won the Guinness world records for “Most Triathlons Hauling Another Person,” and for “Fastest Marathon Pushing Another Person in a Wheelchair.

Jerusha Duford, who was born into influence, is the fourth member of the panel.

The 43-year-old granddaughter of the iconic evangelist Billy Graham, she is an author, writer and committed Christian but, for much of her life, remained less involved in the religious community’s activism. While many family members became evangelists, she stayed sequestered, managing a West Palm Beach store and operating a pediatric hearing center.

She was satisfied raising a family, building her grandfather’s already prodigious legacy through writing and contributing to numerous publications and by compiling stories of people whose lives improved thanks to Billy Graham’s work, collections that were published in 2014 as “Thank You, Billy Graham,” and “Well Done, Billy Graham,” which was released five years later.

But she was catapulted into activism by Donald Trump’s election as president. “I was practically born with a passion for those whose road was harder than my own,” she wrote in a USA Today op-ed endorsing Joe Biden. “But now I feel homeless. Like so many others, I feel disoriented as I watch the church I have always served turn its eyes away from everything it teaches.”

The fifth panelist is the Libertarian writer and commentator, Kristin Tate. A former reporter for Breitbart News whom Stephen Bannon called “a real firebrand,” Tate is a weekly op-ed contributor to The Hill and frequent commentator on Fox News and CNN. Her work focuses on taxation, politics, and the economy, and her writing has been published in The National Review, The Washington Examiner, Real Clear Politics, and The Daily Caller.

Tate is both a rising star in circles decrying government overreach and, as an outspoken critic of movement conservatives’ tendency to alienate young people, among groups seeking to expand the conservative tent. She gained prominence prior to the 2016 election for her efforts to make the Republican party more appealing to Millennials, advising the GOP to focus on the economy rather than lambasting issues millennials embrace, such as abortion and LGBTQ rights. That led Red Alert Politics, a D.C., based conservative news and opinion website, to name her as one of the 30 most influential right-leaning leaders under 30 years old in 2016 and 2017.

Tate’s first book, “Government Gone Wild: How DC Politicians are Taking you for a Ride-and What you can do About It,” explores how the values of autonomy and independence make Libertarianism a natural fit for millennials. Called “a libertarian manifesto aimed at Millennials” by the Libertarian Reason, the book warns that Americans are not as free as they believe and that they need to hold politicians accountable to create change. A natural rhetorician with a bent for economics, Tate’s subsequent books focused on covert government taxation and the domestic migration patterns of Democrats to low tax states.

Moderated by former NBC correspondent and national talk show host Jane Whitney, this interactive symposium, which begins at 3 p.m. on July 25th and runs 90 minutes, will be live streamed, allowing anyone with an internet-connected device to participate and ask questions. Tickets can be reserved for $25 at www.conversationsonthegreen.com.

All proceeds from Conversations on the Green events benefit local organizations including the Susan B. Anthony Project, New Milford Hospital, Greenwoods Counseling & Referrals, and the American Nurses Foundation Coronavirus Response Fund, which provides immediate assistance to those risking their lives during this crisis.

Conversations on the Green brings together nationally-recognized voices together to support its mission of educating and invigorating the American public through discussion of the country’s most provocative issues and ideas. Based in Litchfield, CT, COGs are interactive, Town Hall style forums allowing both the speakers and the audience to share experiences, perspectives and insights in an effort to build an ongoing conversation that strengthens community bonds.

On the day of the event, we’ll send you a link and a unique password to a private Vimeo channel that allows us to live stream our programs safely. Questions for our panelists may be submitted in advance during registration.